The American action-adventure mystery teen drama “Outer Banks” had premiered its First Season on Netflix on April 15, 2020. The show was an instant hit with its melodrama balanced by a strong sense of adventure.

The show gave vibes of an idle beautiful summer afternoon and was bound to hook with the audience. The audience fell head over heels for the show making it the 19th most popular title so far in 2020 and started craving to see more of it. The makers immediately recognized the audience’ choice and renewed the show for a second season, rest of the details are as follows:

When is Outer Banks Season 2 Releasing?

The show was officially renewed in the July of 2020 with Netflix posting a photo of cast members sporting a victory sign. Then a video was released as well with the cast members showing optimism.
Later an official confirmation regarding the initiation of filming was made in September 2020 which finally wrapped up on April 7, 2021, while facing delays due to the strict restrictions of the pandemic. Given that, the postproduction would have started by the mid of April and if things go fine, “Outer Banks” have a high probability to be released by the fall of 2021. 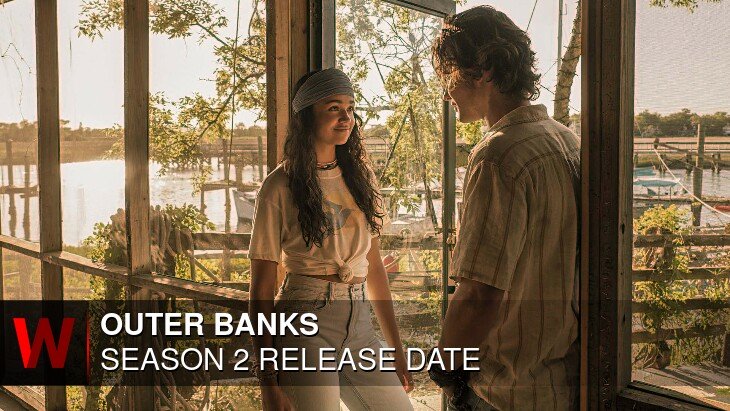 Besides the show’s original cast, some new actors are also going to be featured in the show. These include Carlacia Grant who would be playing the role of Cleo, a confident and fearless Nassau girl, a formidable artful dodger whose world collides with the Pogues. New faces in minor roles include Jontavious Johnson as Stubb, Nick Lawrence as Deputy Collins, Shane Miclette, Matthew, and Elizabeth Mitchel in an undisclosed role.

What to expect from Outer Banks Season 2?

Season 1 of Outer Banks had ended at an epic cliffhanger with Pogues discovering gold within the depths of the sunken Royal Merchant. Picking up from here, as Madison Bailey Claimed, Season 2 will be much more adventurous. It may also open up with a time jump. Also, the makers have planned to continue the show for more seasons so we may get to see a lot of mysteries unfolding as well as tangling up. The characters may even be planning revenge. Let’s just speculate until the official synopsis is released.