Hero is a 2019 Indian Tamil-language action thriller directed by P.S.mithran starring Sivakarthikeyan, Abhay Deol, Arjun, Kalyani Priyadarshini and Ivana in prominent roles. The story was written by P.S.Mithran itself along with Pon Parthiban, Safari Muthu and Antony Bhagyaraj.

The film is scheduled to release during the eve of Christmas on 20th December 2019, clashing with Dabangg 3.This film will be released in Dubai on 19th December, a day before its original release date. 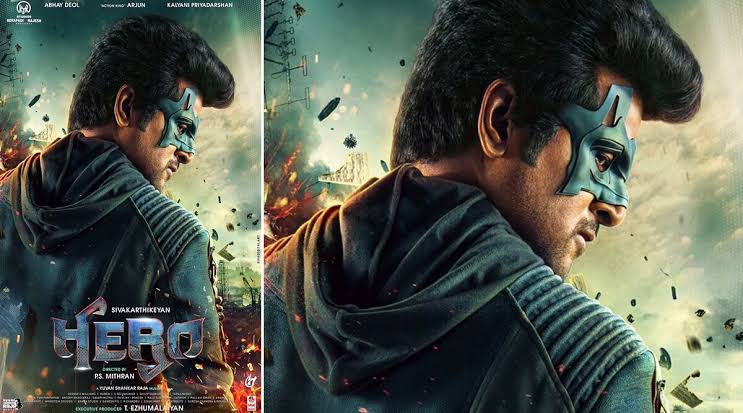 The film was produced by Kotapadi J.Rajesh under his production house KJR Studios. This film’s music was composed by Yuvan Shankar Raja, marking his second collaboration with Sivakarthikeyan and also with the director P.S.Mithran.The cinematography was done by George C Williams and got edited by Ruben.

The Title Poster of “Hero”, announcing the release date was released on 27th July 2019. The official teaser was launched on 24th October 2019 by Salman khan. The teaser released a positive response and got a huge of 6.8Million views on youtube. The trailer of this film was later released on 13th December and got 4.8 Million clicks.

After a successful debut through Irumbu Thirai, director P.S.Mithran is collaborating with SivaKarthikeyan for his 2nd film Hero. The crew of director Mithran’s previous film was also retained for this film as well including actor Arjun who played the main antagonist in Irumbu Thirai.

Yuvan Shankar Raja, who is prominently known for his recent work “rowdy baby” composed an 18-minute lengthiest score for Hero. The soundtrack album of this film was released on 15th December 2019. Also, his previous work “Nerkonda Paarvai” received a positive response.

In this film, Sivakarthikeyan will be seen playing the character Sakthi, on the other hand, Arjun, as Sakthi’s mentor. Sivakarthikeyan is much awaited for this film as his previous works “Namma Veetu Pillai” and “Mr.Local” did not do well in the box office.